In case you hadn’t heard, the Earth is a sphere. No, really. 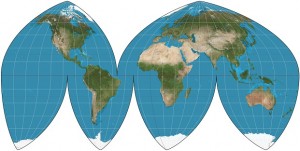 The Boggs eumorphic projection would be a pain to simulate

One problem with the planet’s shape is that it makes it extremely difficult to plot its entire surface in two dimensions. Cartographers have been arguing for millennia about how best to represent a flat map of Earth. Few of the most popular projections are perfectly rectangular. Fortunately, LoreGen is not bound to geospatial verisimilitude.

The basic, underlying structure of any LoreGen world is its map, a rectangular grid. The first thing generated for each planet is the grid, starting with the size of the grid. Earth’s circumference is about 40,000 kilometers, and that’s the default average width for a planet generated by LoreGen.

(The parameters for the planet’s width — average, standard deviation, min, and max width, along with the ratio between the width and the height, which is by default .75 — can be modified in the “World Rules” data file, worldrules.csv) 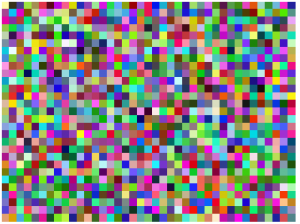 A grid of world blocks of a random world, with each block a random color. This planet is slightly smaller than average at 39×29 blocks.

Once the size of the world is determined, the world is chopped up into squares that are 1000km by 1000km wide. Within LoreGen, these are known as “world blocks.” Each one of these blocks represents a discrete section of the planet, and all geographic information is represented in these world blocks.

(World blocks can be composed of sub-blocks when the simulation deals with finer details, but the first pass of creating the world and divvying up space for continents and oceans deals with just the top level. More on this in a future post.)

In order to keep the map clean and complete, the world’s width and height are “truncated” so they fit neatly into 1000km by 1000km blocks. In other words, there’s no space beyond the edge of the map.

To start, all of these blocks are identical and lack any grouping or relationship into geographic forms, but that quickly changes.

With a grid of world blocks, and a few basic parameters set, LoreGen’s next step is to group the blocks into sections that will form the basis for continents.